After making plans to rendezvous for lunch, we set off to explore Amsterdam.  Vince headed off to explore the Rijksmuseum, Dam Square, (shown above) and  visit aboard one of the many houseboats lining the canals (shown below). 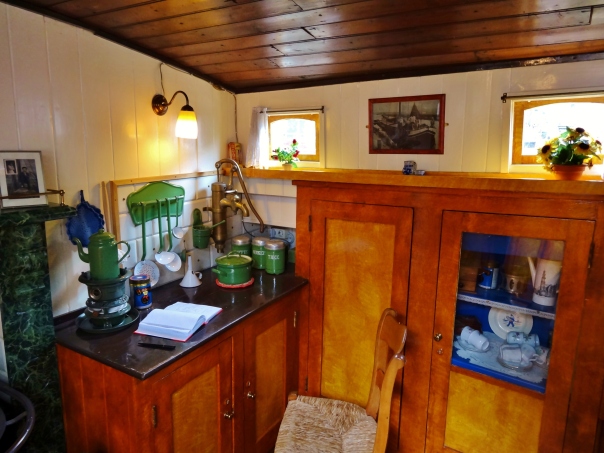 Jack and I set off to explore The Church of St. Nicholas (or St. Nicolaaskerk in Dutch), Museum Amstelkring, also known as “Our Lord in the Attic”, and De Oude Kerk (The Old Church).

My first impression of Amsterdam was that, like most of Europe, it was very old, but still very much in use.  Signs of renovation were everywhere.  It seemed like litter was everywhere, too.

The next thing one couldn’t help but notice was that there were thousands and thousands of bicycles!

There were bicycles zipping past in the bike lanes, bicycles chained to every imaginable stable object, including being chained to each other, seas of bicycles in bicycle parking lots.  Once again I vowed to ride my bicycle more after returning home. 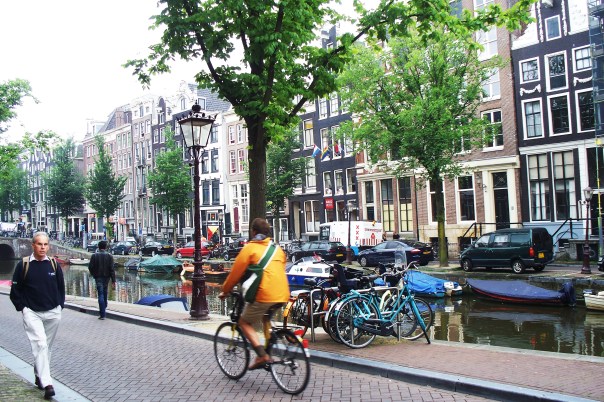 Amsterdam is very busy, with traffic, bicycles and people, moving purposefully toward their individual destinations, along with hoards of visitors characterized by their slightly dazed expressions pretending to know where they are going.  That was us, as well, as we made our way along Prinz Hendrickksen to the massive cathedral across from the train station.

We, along with scores of other tourists were surprised to find the doors to the church closed and locked.  It was too early…they were not open for another hour.

So, we made our way along the canal to De Oude Kerk, which was undergoing major renovation.  Again, all the doors were locked, but were due to open any time…if we could just find the entrance!  My husband Jack was getting tired, so I parked him by one of the entrances and continued around the massive building looking for the main entrance.

As I rounded one corner I saw a young woman in a window display and for a moment, thought she was arranging a new display, but was puzzled by the fact that she was wearing a bikini.  Too late, I realized that I was in the heart of the Red Light District and that SHE was the window dressing!  If made me wonder if prostitution was an honorable occupation here in Amsterdam?  If this girl’s mother would not be ashamed to have her daughter choose this line of work, or if this was a desperate way to exist until something better comes along?  The thought troubled me, as I pondered this universal dilemma…a young woman on display, for sale, in a shop window, at 9:45 in the morning.

Around the next bend, there was the Church entrance!  I hurried back to find Jack right where I’d left him, looking a little nervous and very relieved to see me.  The doors opened and we walked inside.

On entering the Oude Kerk, the immediate impression is one of beautiful light.

Some of the light is colorful, shining through the medieval stained glass windows, while some of it is bright white, illuminating the centuries-old graves, entombed in the floor.

Although originally built as a Catholic place of worship, today the Oude Kerk is one of the unique buildings expressing the national character of Dutch Protestantism.  The Oude Kerk originally functioned as a harbor church, where sailors and fishermen would pray for a safe voyage. The procession boats (hanging miniature ships) are reminders of the time when the church overlooked the open harbor.

The Old Church has four exquisite organs, which can be heard during services and concerts.  The church tower contains the centuries-old carillon and church bells. 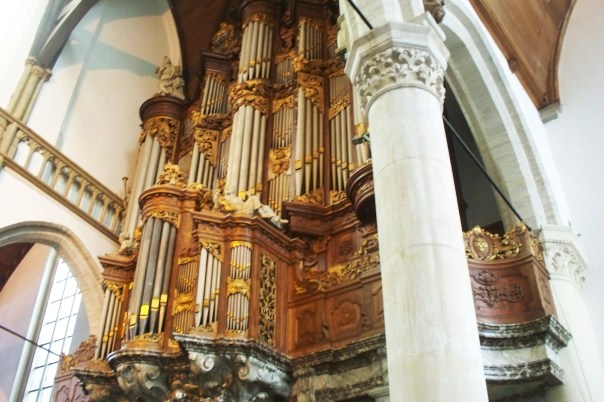 Click the link below to see and hear the organs.  http://www.youtube.com/watch?v=ZNd8rDfN2fo

Next, we visited the Museum Amstelkring, also known as Our Lord in the Attic, one of the oldest and most remarkable museums in Amsterdam.   Behind the characteristic facade of the house by the canal lies a largely original 17th-century home and a complete hidden church. 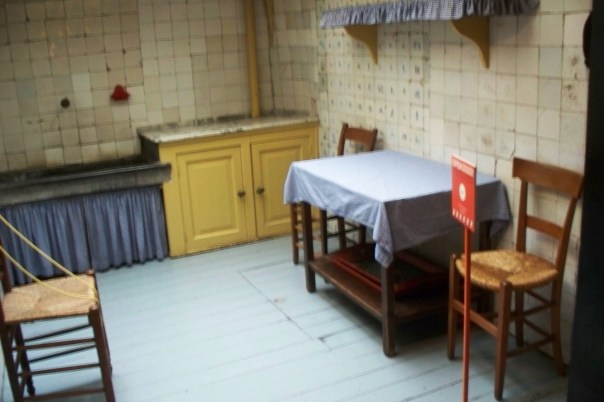 This hidden church ‘in the attic’ was built during the Reformation, when Catholics were forbidden to hold public services.  Jan Hartman bought this house on Oudezijds Voorburgwal and the two adjacent buildings on Heintje Hoekssteeg 350 years ago. He had the attics of the three houses rebuilt into a Catholic church conforming to the conventions of the day, yet nothing on the outside would suggest that there was a church inside.

Here you can see where he took out the middle attic of the narrow canal house. 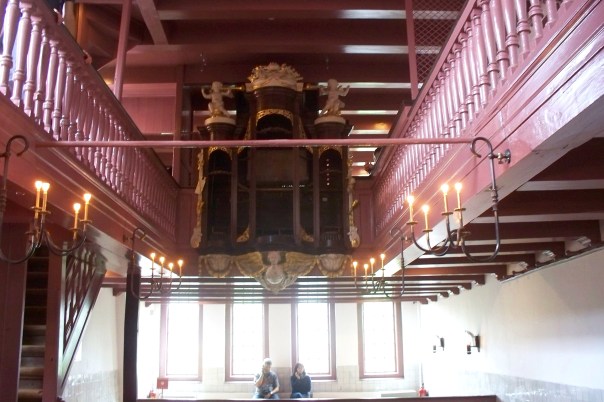 It also was being renovated while we were there.  There were lots of steep, narrow stairs, as is typical in canal houses, so Jack never made it to the attic, where the church was.

Next, it was back to see the Church of St. Nicholas, which the Sint Nicolaaskerk (St. Nicholas Church) is one of the first Amsterdam monuments most visitors spot.   It is the city’s major Catholic church.  As we stepped inside to visit, Mass was just beginning.  It was a Spanish Mass, and we stayed for the entire service.  We enjoy attending church during our travels.

It was almost time to meet Vince for lunch, so we found a table alongside the canal and enjoyed a drink.  The earlier rain shower had passed and the weather was warm and delightful.

We ate lunch outside, as well, at the Restaurent Smits Koffiehuis. 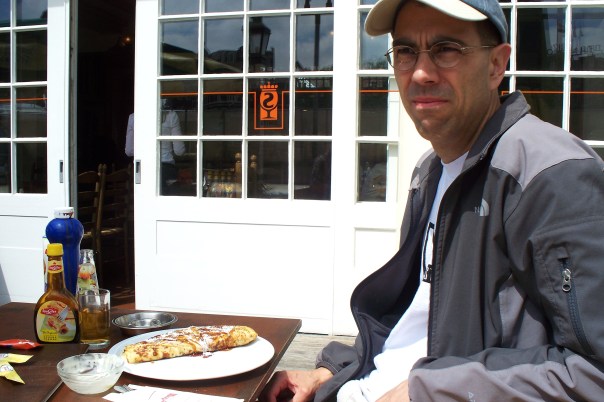 Vince tried the Dutch Pancake, for which they are famous!

Next up was a narrated canal tour of the city.

I wonder how many cars and people and dogs fall into the canals? 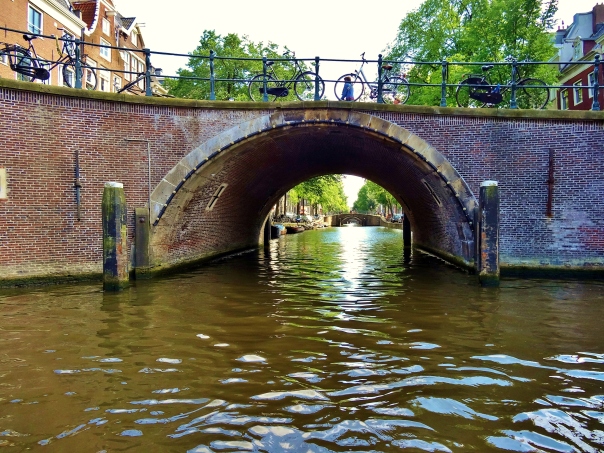 Unfortunately, we kept dozing off and dropping our cameras.  Jet lag was catching up to us!   It was time to head back to our hotel to shower, read, relax and turn in early.

Tomorrow would be a big day!