My husband and I just returned from a “Hunting the Light” cruise on Hurtigruten (pronounced “HURT-ah-ROOT-en), in Norway.   (Be sure to click the link above to view a short video that shows perfectly what we experienced on this cruise)  The Norwegian Coastal Voyage on Hurtigruten is over 1,490 miles long, in and out along Norway’s western coast, from Bergen to Kirkenes, with 34 ports of call on both the north and south voyage. We were on the ship MS Midnatsol (MID-knat-SOLE), named for the Midnight Sun.  Our voyage began on December 27, 2014 so we did not see the midnight sun on this trip. However, we were able to see the Northern Lights and experience polar night. It was magical.

A cruise on Hurtigruten is different from your typical cruise, in that these ships are working ships, sometimes only stopping for 15 minutes at a port.  Each day the ship is in a certain port for a few hours, allowing one to leave the ship and do some exploring on land. Another difference is that there is no casino aboard or other entertainment such as you might find on a typical cruise.  The entertainment on these ships is the scenery.  There is plenty of time to read and relax and visit with fellow passengers. Our travels began in Seattle, Washington with a 6½ hour flight from Seattle to Reykjavik, Iceland. From there we flew to Oslo, Norway, a 2 hour flight, and after going through security once more, and another 50 minute flight, we arrived in Bergen, Norway.

The temperature was just at freezing. They had received a rather heavy snowfall the day before, so everything was covered in white. The air smelled so crisp and clean. Hello Norway! Hurtigruten picked us up at the airport and transferred us to the Hurtigruten Terminal, about a 30 minute ride.  There are frequent busses traveling between the airport and city center, but those do not stop at the Hurtigruten terminal.  It was worth it to us to pay a bit more and have door-to-door service. They were just starting to check in passengers, as we arrived. 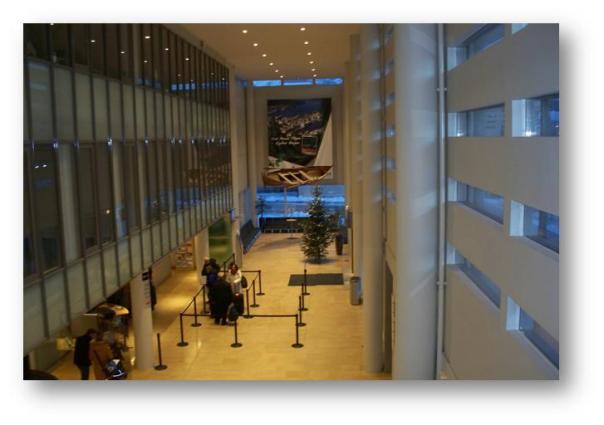 We were among the first group to get the safety briefing, and then it was “Welcome Aboard!” 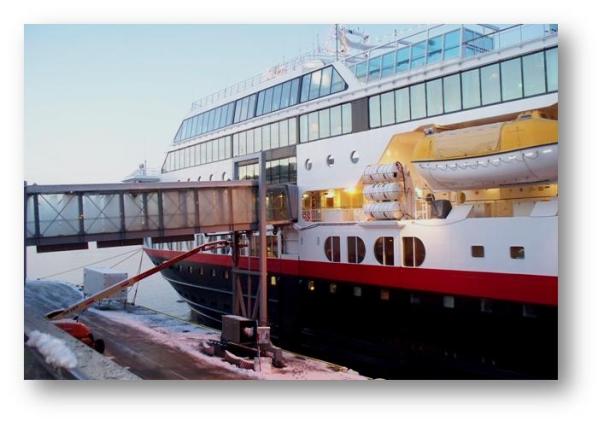 We were assigned inside cabin number 600, near the bow of the ship. At first, the cabin seemed just a bit small, but once we unpacked and tucked the suitcases away, it was quite adequate.

The bed on the left made into a couch during the day.  The strap you see across the bed hold the bedding in place when it is made up as a sofa.  To sleep, you simply fold the bed down and unhook the strap.  The bedding was a fluffy comforter inside a duvet, and the beds were extra long and very comfortable.  While we were at breakfast, the cabin steward came in and cleaned and turned the bed back into a sofa.

The bathroom was small but very efficient and the shower put out lots of hot water and did not flood the floor.

It was quite dark in the cabin once the lights were off, since it was an inside cabin, so we often left the bathroom light on, just to guide us a little.  It was a very comfortable room and provided us with everything we needed.  There was a flat-screen television that had three or four channels as well a view from the bridge and maps showing where we were at any given time.  These same views were shown throughout the ship on numerous flat-screen displays.

Looking from the ship, the lights of Bergen glittered.  The Fløibanen is visible on the hillside.

Dinner was served at 6:00pm — a bountiful buffet with a wide variety of fish, potatoes, bread, vegetables and a desert assortment.  The food on this ship was spectacular, the best I’ve tasted on any cruise that I’ve been on.  However, something you should know about and budget for is that beverages are not included with dinner. Coffee, tea, hot chocolate and a variety of fruit juices are available at breakfast and coffee and tea are available at lunch.  At dinner, they come to your table and ask what you would like to order.  There is a “water package” available where you can purchase two bottles of water a day, either sparkling water or “still” water.  For the 12 day cruise, this cost 495NOK or about $65.  This was a bargain, as this package was available to purchase before sailing, and would have cost $83 at that time. There are wine packages available for purchase as well, that include one bottle of wine and two bottles of still water at each dinner.  Please be advised that alcohol is very, very expensive in Norway!  This wine package for the 12 day cruise would be $703 when purchased ahead of time.  We didn’t purchase it on this trip, so I can’t tell you what it would have been had we bought it on the ship.  My husband ordered a Pepsi a couple of times and it cost 40NOK which is about $5.25.  A beer costs 69NOK which is about $9 and my husband had a glass of wine, which automatically comes with a glass of water, which was 96NOK or about $12.60.  We only had a couple of drinks on this trip, to toast New Year’s Eve, and that was about it. There was a coffee/tea package available as well.  We did purchase this for 345NOK each, or about $45.  Being used to half-gallon-sized coffee mugs in the United States, these little mugs measuring 5.25″ tall and 2.25″ in diameter at first looked quite comical, almost like toys.  However, they are stainless steel lined, like a thermos, and keep stuff really hot for as long as you want.  With one of these little babies in hand, you could have unlimited coffee or tea around-the-clock for a full year and daintily sip it at any time of the day or night. Plus, it made a nice souvenir.  The coffee was not real good but they did have a wonderful assortment of tea. 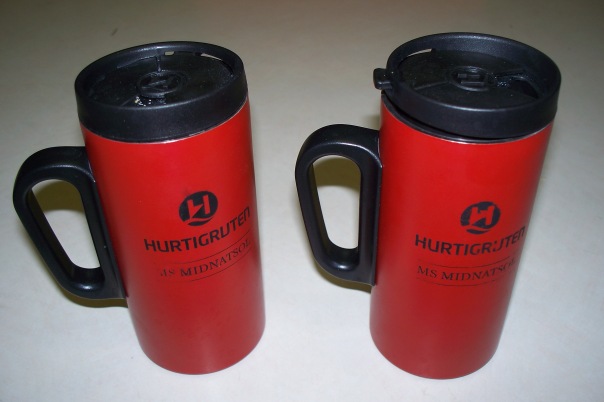 The rest of the time I filled my water bottle from home from the bathroom sink! That first night, after we had eaten dinner, jet-lag was really dragging us down, so we turned in for the night, even though I wanted to watch us sail away.  I heard the anchor rattling and the ropes being cast off at 10:30pm as we prepared to embark on our journey, but I could not get myself out of bed…until 3am the next morning, when I was wide awake and ready to go!