Happy New Year!  Day 6 of our voyage we were approaching the northernmost point of our journey — Nordkapp ~ the North Cape, on the Barents Sea.

Previously, when we were here in the summer, the whole North Cape area seemed very remote to me.  It was interesting to see the town again in the winter.  Surprisingly, it seemed almost as busy this time as it had during the summer.  Approximately 110 cruise ships call annually at Honningsvåg, making it among the five largest ports of call in Norway.  During the summer, the biggest draw is to enable cruise ship passengers an opportunity to view the midnight sun.  Two Hurtigruten ships per day call at Honningsvåg year-round, as well as numerous cargo ships and fishing vessels.

It was snowing when we arrived, and very windy.  Although it was about 11:30 in the morning, it was already full dark.  Notice the avalanche fences on the hillside rising straight up from the main street in town.  Thank goodness for spikes on our shoes — the street was a sheet of ice!   The shops were closed, as it was New Years Day.

Two shore excursions were offered at this port of call– a bus trip out to the North Cape (Nordkapp) plateau, 1007 feet above the water, where a concert was being performed in the North Cape Museum, or a mini bus trip to the little fishing village of Skarsvåg.  I chose to visit the fishing village, as I was curious to see what life is like this far north in this remote a location.  Skarsvåg, with a population of about 60, claims to be the northernmost fishing village in the world and the northernmost settlement accessible via a major road network.

As we stepped off the bus, we were hit broadside by gale-force winds.  Those without spikes on their shoes were blown sideways as they skated across the icy path to the Christmas Cottage, glowing warm, cozy and welcoming.  The smell of hot spiced cider greeted us as we stepped inside the cabin, filled with Christmas decorations, and found a place at the table under a huge chandelier that looked as if it were made of icicles. 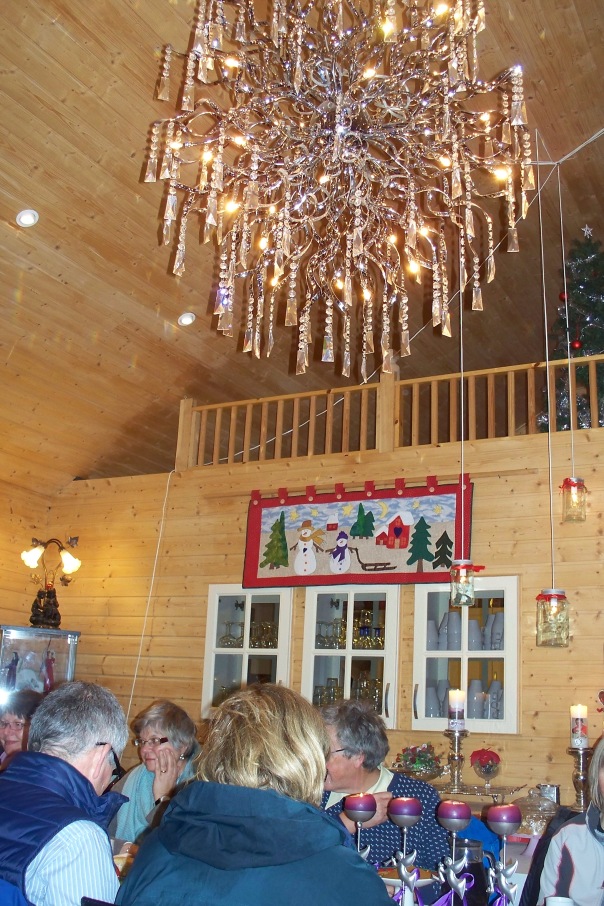 While we ate, she explained what it was like to live in a remote fishing village your whole life.  He husband, now in his 70’s, had fished his whole adult life, mostly for cod.  He had recently switched to catching king crab, which was also plentiful in the Barents Sea and brought in more money.  He had built the cottage for her to display and sell her handmade items as well as providing a way for his wife to earn a little extra money for the family.  She said that they eat fish every day except on Sundays and Christmas.  There were no more young people left in the village, just a declining number of old fishermen still eeking out a hard-scrabble living from the sea.  She loved the village though, and the tight community formed by necessity and mutual dependence.

Before it was time to leave, we had a few minutes to admire all the handicrafts and other Christmas items she had for sale.

As we stepped outside, I stopped to take a picture of the outside of the cottage when suddenly, the gusting wind snatched my hat from my head and sent it careening over the snowdrifts.  I chased after it and promptly sunk up to my thighs in a heaping mound of snow.  As I pulled my foot out my shoe was left behind inside the snow drift.  I plunged my arm into the drift, all the way up to my armpit, reaching for my shoe and the spike that had popped off and instantly frozen inside the drift.  People were boarding the bus and I momentarily panicked, hoping I wouldn’t be left behind, shoeless in a huge mountain of snow.  The gale wind would carry off any cries of “Wait for me…I’m over here buried in a snowdrift!”  Grabbing my shoe and my spike I skidded and staggered to the bus, saying good-bye forever to my hat and wondering who would find it in the spring.

On our way back we had to stop and wait for a car to be pulled out of a snowbank, where it had maybe blown off the road.  Our driver was annoyed at the delay, as the ship must stay on schedule and would not be happy at all to have to wait for us if we were delayed.  Once we got past the tow truck, we sped along the roads that were all but invisible in the deep snow.  We all breathed a sigh of relief that the ship was still there.

It turned out that even though the other busses were following a snowplow on the road to Nordkapp, the weather was too dangerous to continue and they had to turn around and abort their trip out to the cape, returning instead to the ship.

We said good-bye to Honningsvåg and continued east and then south, along the Barents Sea.  After dinner, the snow had stopped and the sky had mostly cleared and the wind had died down as people began to gather out on deck 9, gazing up at the sky.  Suddenly, there they were again…the Northern Lights! The pictures below were taken by someone who was on our ship that night.

Suddenly a cloud that simply seemed to be illuminated by the moon, would begin to glow and slowly snake its way across the sky before slowly fading away.  And then suddenly, in another direction, another aurora would begin to form and a collective gasp would alert the others to look where people were gazing and pointing, in reverent fascination and awe. 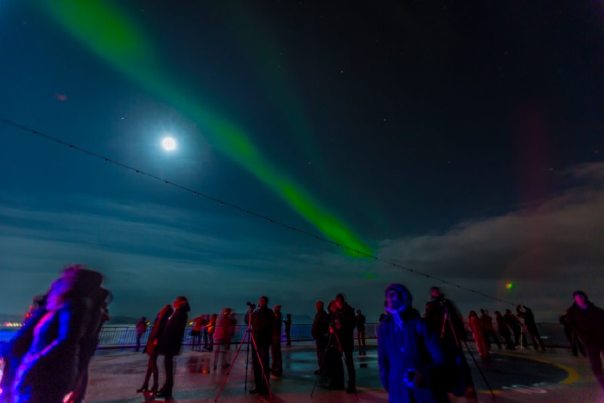 Sometimes they looked like fire on a log in the fireplace, dancing and undulating before streaming across the sky and disappearing.  The display went on for over an hour, while we stood there mesmerized by the sight.  None of my pictures turned out, so I was thrilled to discover these that had been posted to the Midnatsol’s webpage.  What a fabulous day it had been!