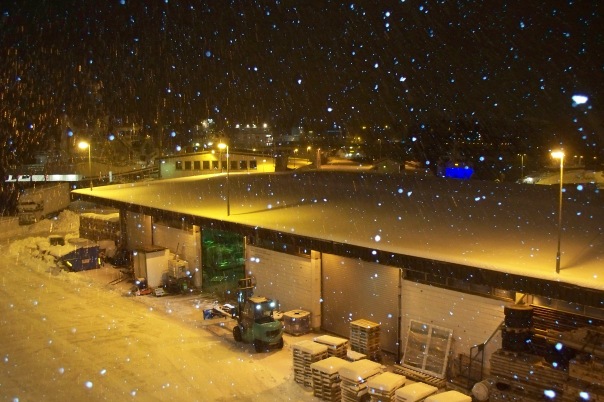 It was snowing when we arrived in Florø at 4:30 in the morning on Day 2.  Florø is located on an island and has a population of about 11,000, about half of whom live in town.  The main industry is fish farming and producing food for the fish farming industry.  Florø also serves as a supply base for the nearby Statfjord oil field.  It was interesting to watch us tie up quayside and watch goods being loaded aboard the ship.  We cast off and were about to leave when suddenly they threw out the ropes and tied up once more.  Shortly thereafter an ambulance pulled up and after a while one of the passengers was trundled off the ship on a gurney, loaded into the ambulance and driven away.  Poor guy.  Imagine paying all that money and looking forward to a vacation and the first day having to leave the ship in an ambulance!  It made me doubly glad that I had purchased medical insurance that would have covered such an eventuality, should that have been Jack or I.

I went back inside the ship and was surprised to see Jack up and about as well.  He told me that he had found a man lying unresponsive on the floor and that he had alerted the crew who began first aid until the gentleman was taken away on a gurney.  I told him that I had been outside and saw the gentleman being loaded into an ambulance, not having any idea that it was Jack that had found him. 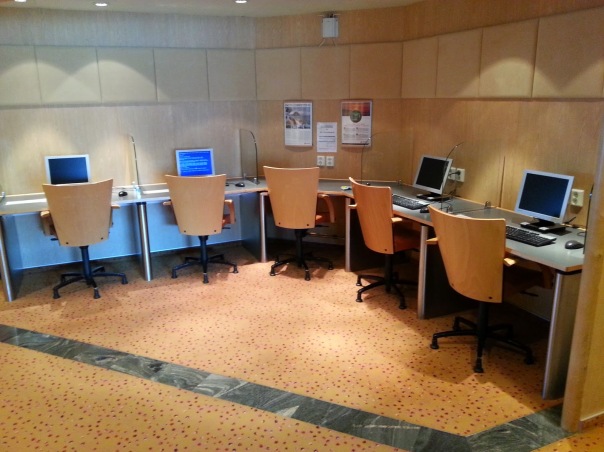 We got our little coffee mugs and tried out the computers.  Beverages may have been expensive on the ship, but there were several computers with free internet access, as well as free wi-fi throughout the ship, which helped balance things out.  These computers were as fast as my computer at home, unlike any other computers I’d ever attempted to use at sea.  Occasionally the connection would go down if we were away from any towns, but most of the time things were great.

There were so many places to just settle into a comfy chair and look out the window and read or write or visit with people.  Everywhere in the ceiling were these little lights at the end of strings that moved gently back and forth with the very slight motion of the ship.  This was the library.  They had books one could borrow (some of them in English) and jigsaw puzzles to work, if you wanted to. 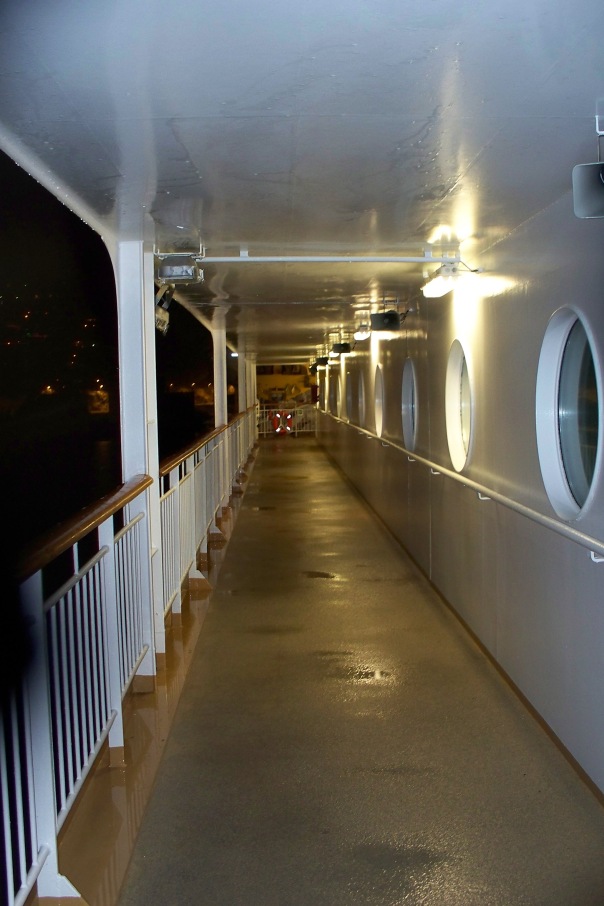 Deck 6 had a covered promenade where you could walk completely around the ship.  This was a great place to take a walk while enjoying the scenery.

Most of the time we were quite near the shore, so there was always something interesting to look at.

About mid-day we arrived in Ålesund, pronounced (OH-la-SUN). a beautiful city that we had visited during our last trip to Norway, in the summer.  Ålesund has a population of about 40,000 with the main industry fishing in the Barents Sea.  I  signed up for a shore excursion to the Atlantershavsparken Aquarium and the Mount Aksla viewpoint. 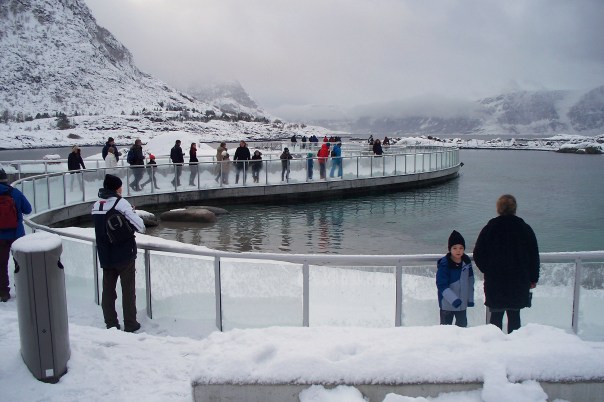 It was a Saturday and the aquarium was very busy with many children and families visiting.  Inside the aquarium were multiple tanks, some of them touch tanks, filled with a wide variety of fish.  A diver, dressed as Santa Claus fed the fish in a huge viewing area, much to the delight of the children.  Outside there were penguins and seals, with underwater viewing areas for both.

The bus then wound through the narrow, curving road to the top of Mount Aksla and the Fjellstua viewpoint.  Twice, cars meeting us had to back up and pull off to the side to let us pass. Several people were also hiking to the top.

The view over the city, from the lookout, was spectacular!

There was a restaurant at this viewpoint that was not open when we were there this time.  The hike up to this spectacular perch is a very popular in both summer and winter.

As you can see, the ground was covered with compact ice and snow that was treacherously slippery.  How did everyone keep from falling down?  It was highly recommended that everyone wear spikes on their shoes when getting off the ship, and luckily we found ours at Costco before we left.

They came two to a package, which was a good thing because I lost one of mine somewhere along the way!  They stretch to fit over your boot or shoe and then fasten with a velcro strap across the top of your shoe.  When in place, they are not even visible on your foot, but they provide sure footing on ice and snow like your wouldn’t believe.  I would highly recommend them for any time you encounter ice or snow, to avoid falls.

You can see the viewpoint we visited earlier in the day, up on the hillside on the top right, from where the previous photograph was taken.

Good-bye Ålesund, we must be now on our way.

5 thoughts on “Hunting the Light continued…Part 2”

Leave a Reply to South of the Strait Cancel reply